The death of Fidel Castro, one of the world’s most iconic leaders of 21st century last week was received with mixed feelings. And rightly so, he was a man of contrasting contradictions as one Chofamba Sithole put it. A polarising figure, even in his death. Regarded as a champion for the poor by some and a ruthless dictator by others.

For us socialists, Cuba is a living testimony on the virtues of socialism. Despite harsh and spiteful sanctions by the almighty powerful United States and her allies Cuba managed to provide quality health care, education and public transport free of charge to all its citizens.

Lest we forget, Cuba is only but a tiny island of about 11 million citizens but its contribution to Africa’s liberation struggles is solid and impeccable. Even during this post-colonial era Cuba has remained our friend, with some African countries benefiting from the health services provided by Cuban doctors visiting on a rotational basis.

However, being a social democrat, my love for Fidel Castro who was an autocrat by any definition is by itself a paradox or rather an oxymoron. I am sure many other social democrats are at pains trying to explain away this contradiction. For fear of being too simplistic, I will not join in this Castro bashing bandwagon. That would tantamount to throwing the baby out together with the bathwater. Fidel Castro had his flaws, he was human after all but to look at his flaws and ignore what he achieved for his country is nothing but reactionary.

For all his flaws, he cannot be faulted for not having a genuine concern for the poor, the underprivileged and the oppressed unlike some thieves, we erroneously address by some fancy titles such as presidents and prime ministers here in Africa. All they are good at is just talk, they preach the virtues of socialism by the day and practice their crony capitalism by the night.

These thieves and murderers, masquerading as revolutionaries surprise me, they too have a strong following and support base like the iconic late Fidel Castro. I must admit, I have struggled to grasp this paradox for a very long time. I just could not understand how an incompetent, corrupt, murderous thief like Robert Mugabe, could be so popular on the continent more so considering the state of affairs of Zimbabwe and its citizens.

Dear reader, if you are a Zimbabwean I know it is a hard pill to swallow, but yes, Robert Mugabe is actually received to wild cheers at international gatherings across the continent. They sing him praises and even glorify him as the true champion of black people.

These praise singers have no desire to acknowledge Gukurahundi, the murderous military campaign he carried out in the provinces of Matabeleland and Midlands in the early 1980s. Their so-called champion of black people is actually a murderer, but do they care? It does not seem so. Have they not heard about his glaring incompetence and corruption?  Yet they remain unmoved, Robert Mugabe is their champion and their hero doing a sterling job, ruining and transforming our beautiful Zimbabwe into the mess it is today.

During my stay in Europe, I have encountered a lot of Africans who see Robert Mugabe in a positive light. In the beginning, I always tried to offer a counter narrative, pointing them to Gukurahundi and how the country was run down by his incompetence and corruption. But I quickly learnt that no one was buying into my narrative. Thus, I began to speak my mind less and listened more to what they had to say.

During that process, I gained some valuable insight into this paradox. If you will allow me, I want to share them with you. They might not be profound, but they can help explain why these thieves have a solid support base and can be at times very popular.

We are creatures of habit

We are told human beings are by nature creatures of habit. I was reminded of this truism a week ago, when a friend of mine was celebrating Obama’s legacy on his Facebook wall. He was expounding how much he loved and admired Obama. Being the eager pan African I am, I sought to expose Obama’s imperialist credentials and put his legacy into a different perspective. I commented on my friend’s post with a website link to Obama’s drone policy record in Pakistan, Yemen, Libya, and Somalia, where 90% of the several thousand killed were civilians. Mind you that Amnesty International and several other human rights organisations have even suggested that the US drone strikes could be classified under international war crimes. But no sooner had I shared my link than I received a harsh rebuke, I was told in plain terms that anti Obama sentiments were unwelcome on his wall.

When people fall in love with a political party, a politician or a demagogue, logic becomes secondary to their emotions. Never expect these people to be rational, like a woman in an abusive relationship they will make excuses for their party or leader. Just like my friend who did not want anti-Obama sentiments on his wall or the American people who elected Donald Trump, when people are in love with their party or politician they are unwilling to listen to facts, they are in a ‘post truth’ bubble, the truth does not matter to them.

The same bubble had to burst for the former vice president Joyce Mujuru and her party members to see how Mugabe and their Zanu PF they adored so much had destroyed our beautiful country. If it was not for their expulsion we can only but guess that today they would still be in Zanu PF, glorifying Robert Mugabe. 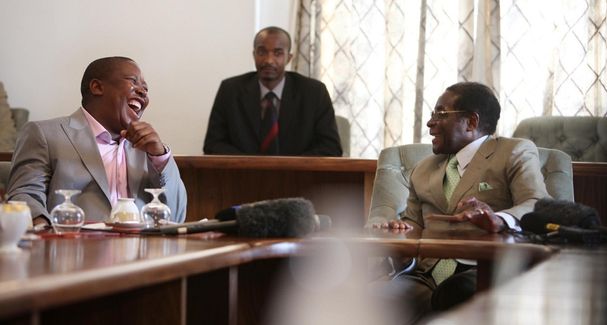 The average African citizen has given up on the leadership on the continent. Poor leadership is ingrained in his/her subconscious, he/she does not expect much anymore. Despite Mugabe’s many faults and shortcomings Africans regard him as their hero. They respect him for standing up against the ever bullying and patronising West. This is because leaders in their home countries share Mugabe’s many faults and weaknesses, but they do not have the spine to stand up to the West. Surely in this land of the blind the one-eyed Mugabe appears as a king.

The same goes for Malema. I do not need to work in the South African public protector’s office to know corruption when I see it. Everyone knows he was a ‘tenderpreneur’ benefiting corruptly from his ANC association. Yet Julius Malema is the most popular politician across the continent under the age of 40. It is because he is bold enough to talk about the difficult questions that South Africa cannot afford to ignore. Another one-eyed king in the land of the blind.

In as much as one might despise Robert Mugabe and Julius Malema for their lack of integrity, one cannot disagree with their views on land and our natural resources. For Africa, cannot begin the serious talk of decolonisation without addressing the land question and the exploitation of our natural resources.

When ordinary people celebrate mediocrity, it is a clear sign that there is dearth of leadership on the continent. But as long as young men and women of integrity shun away from politics, from speaking about Africa’s natural resources, from standing up to the ever bullying and patronising West, Africa will forever be held at ransom by these fake revolutionaries.

A new generation of leaders must arise, leaders who will speak to these Pan African issues and more importantly visionaries who will fulfil Africa’s full potential.