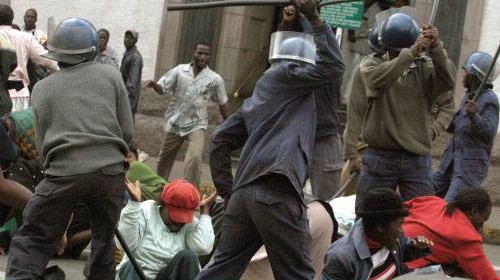 It’s easy for non-participants in this our struggle for democracy, economic and political justice to say that all violence is abhorrent. Quite easy forthem to stand aloof and retain their moral purity, condemning both the oppressor and the oppressed. Quite easy for pacifists deeply influenced by their philosophical idealism and absolutist ethics to let their fellow citizens suffer violence from the state than sacrifice their own non-violent principles to defend them.
We must accept and respect nonviolence but not as an absolute moral principle. We celebrate the war of liberation. At the same time, we castigate nationalists who were against the liberation war. Yet these nationalists believed independence, could be achieved through nonviolent means. We need to pause, sit down and reflect.
When you hear government representatives and their surrogate state media, you would assume that violence is by definition something done by non-state agents. In their eyes what is done is not important, but who does it. When the police use violence, it is in defence of the security of the state and its citizens. But when the citizens react violently to this violence it is terrorism and counter revolutionary. That kind of logic fellow comrades is idiotic.
We have endured so much violence at the hands of our government as citizens of this beautiful country. For violence is not only physical. We have been stripped of our dignity. Firstly opposition members were denied land under the land reform programme now those living in areas affected by draught are being denied food through Zanu PF’s partisan food distribution. Some have been forced to live as illegal immigrants in foreign lands. Our decent sisters forced to engage in prostitution. Our disenchanted brothers forced to become petty criminals. It is of paramount importance for ordinary citizens to recognise that they are capable of reclaiming their authority over the Zanu PF ruling thugs. We must break our bonds of passivity without fail. For with them we are totally incapable of decisive political action. If violence does move the citizenry to break these bonds, then I think there’s a pretty strong case for violence.
Virginia Held asks an interesting question, what can a people do to free themselves from oppression and have their rights restored and respected? Malcolm X believed that oppressed people should use whatever means is necessary to secure their freedom. As citizens we have tried to engage our government through peaceful marches only for the peaceful protests to be quashed by a rogue police using button sticks, water cannons and teargas canisters.
Dismantling such an illegitimate and brutal regime even through the use of violence is actually a moral improvement. However, to me the question of whether we can use violence to overcome Zanu PF evil, is not a moral question but a tactical question. I am only concerned if violence is going to be more efficacious than a nonviolent programme of action. I would only accept advocacy of nonviolence, not as an absolute moral principle, but as a better tactic to achieve our desired ends.
There are numerous philosophical arguments justifying the use of force. I personally do not have any problems with the use of force, more so in countering the oppressor’s violence. I am a firm believer in distributive justice, an eye for an eye and an arm for arm. They must know that they are just as human as we are, if they are pinched they too can feel as much as we do. In 2008 we allowed Zanu PF to set up bases across the country. These bases later became torture chambers for the opposition. Unfortunately, many of these bases are still functional to date that. Days of being slapped on the cheek and giving the other cheek must come to an end. However, we must be careful to target the right people. Targeting the wrong people is counterproductive, like looting stores, destroying vendors’ wares and other private property unless of course it belongs to Zanu PF chefs. The last thing we want is to lose the people’s sympathy.
We must know that governmental lash back to violence is inevitable, and when it comes, it is usually more severe than we anticipate. But government’s overreaction can help radicalise the formerly passive, win international support and more importantly put Zimbabwe back on the agenda of international agencies like SADC and the AU.
Conclusion
Thus we cannot afford to condemn people who are acting in self-defence, against a violent regime. Doing so is by default to accept that the government’s use of violence is legitimate. If I were to seat on God’s seat of judgement I would judge and punish harshly those who are unable, for lack of imagination, courage and support, to respond to violence and injustice violently, it may be better to respond non-violently than to endure it passively without protest.
“Where slavery is the given order, fighting for freedom appears as disorder.”