Wednesday the 14th of February, was quite an unusual day. Even though it was valentine’s day, being a political animal, I spend the whole day following political developments in South Africa. Former president, Jacob Zuma had been recalled by the ANC and was now expected to either resign or face a vote of no confidence in parliament the following day. Exhausting as it was, hopping from one news channel to the other, I was expecting to have a relaxed evening briefly with the Mrs and then go on to watch the champions league match between Real Madrid and PSG. But immediately after finishing dinner, I began seeing tweets saying that our former Prime Minister Morgen Richard Tsvangirai had passed away.

Farewell to thee Son of the Soil: Tsvangirai

I did not believe those tweets, I thought perhaps someone was playing a really nasty hoax, until I saw the news confirmed on the SABC YouTube channel (ZBC this could have been you but you prefer propaganda). Even though, I knew he was really sick, but his death still came to me as a shock. Somehow, I thought we still had time with our dear leader, but God had other ideas. 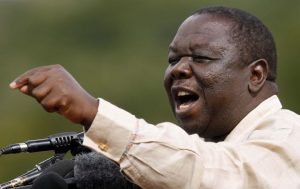 When the news eventually sunk in, that “Save” was no more, I was overcome by a deep sense of loss. No words can express exactly how I felt. But I was assured by the condolence messages that began trickling in on social media that I was not alone in my loss. Foes, frenemies and friends all agree, that our nation lost a towering giant, a beacon of hope and a ray of light that shone during the dark days of Mugabe’s reign of terror.

Farewell to thee: son of the soil. Go well my leader, you fought a good fight and stood in the gap for your nation. Zimbabwe will forever be grateful and indebted to the love, dedication and sacrifice you offered to us as a people. We will not mourn your passing away but instead, we will celebrate your life and legacy.

To the Tsvangirai family

It is not my place to provide unsolicited advice, but all the same, I hope someone within the family has enough reason to consider this advice.  I bear no grudge, I am giving this advice, out of love for Morgan Tsvangirai. All I want is for us to bury, your son, our president and the nation’s former prime minister with the decency and dignity that he deserved.

Let me start by expressing my heartfelt condolences to the entire Tsvangirai family. I know Morgen Tsvangirai left a void difficult to fill. It is my prayer and hope that the good Lord will give you comfort, peace and especially wisdom to guide you during this difficult time and period of mourning.

A few days ago, I watched with shock and disgust, Morgen Tsvangirai’s young brother divulging family problems in front of the camera. Every home has got its own problems. Why divulge yours, to the rest of the world ? Instead of soliciting sympathy you have brought not only ridicule but shame to the Tsvangirai family. As a piece of advice, please resolve your family problems, away from the camera. Gogo Manyonda, I know you are grieving but please, reserve the drama for another occasion. We want to bury your son and our leader in dignity without fail. I hope that is not too much to ask. 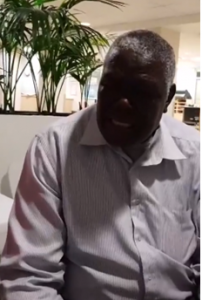 Secondly, Tsvangirai was a politician and so to speak, politics was his vocation. So as a family, please, do not mix Morgen Tsvangirai’s work issues, with your family disputes. I beseech thee, to refrain from entangling yourselves in MDCT’s factional fights. Let the politicians comment on political issues, your duty as a family is to give Morgen Tsvangirai a befitting send off. He deserves it and we all, owe it to him.

Even in death Morgen Tsvangirai brings tough discussions to the fore

During his days as a trade unionist and as the leader of the opposition, Tsvangirai was always able to force the nation to discuss difficult issues. True to his nature, even in death, he has once more forced us to discuss one more difficult issue. That is the treatment of widows during and after the burial of their spouses, by their in-laws. 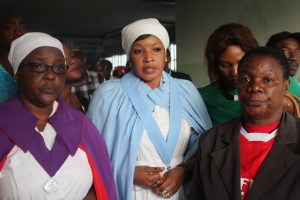 Elizabeth Tsvangirai at her husband’s funeral

I have nothing but respect for you, Elizabeth Tsvangirai. You have maintained your dignity and a sense of level headedness during this difficult period. We can only but imagine, the pain you are going through. Not only are you grieving the loss of your loved one, but you also have to bear being publicly accused of infidelity. And we have not forgotten that two weeks ago Tsvangirai’s family members attempted to take property from your Highlands home. Rest assured that Zimbabweans can feel your pain. Gogo Manyonda’s backlash on social media, is a testimony of how we feel. Please, know that you are in our thoughts and prayers.

But as the saying goes, to every dark cloud there is a silver lining. Let us make the most of this sad episode. And have a frank discussion on this matter that affects a lot of grieving spouses.

This is a national problem

Somehow, I had naively thought that we were over this issue as a nation. Apparently, the lessons we learned from our heated discussions after the screening of the movie ‘Neria’ over two decades ago, were incomplete.

Rather than restrict this debate to what happened to Elizabeth Tsvangirai, let us discuss this issue in the broadest of sense. We can all agree that this drama happens too often in our  communities. Yet no one has stood for these grieving spouses, tichiti pahukama hwavo (let them resolve their own family matters).

This has to stop. Society must always be sensitive to the widows/widowers’ feelings and respect their constitutional rights as surviving spouses. They are human beings too, vakatsunywa vanotochemawo, let us give them space to grieve. Hands off their property and stop the unnecessary slander and gossip.

Too often, we see widowers asked to pay the full bride price, before they can bury their wives. Of course we have accepted this pathetic behaviour under the disguise of culture. Which is nonsense in my view. Surely how can fathers place money over the decency of their daughter’s burial? In some occasions, the in-laws can be greedy leaving behind the widower with no kitchen utensils. It is extreme but it does occasionally happen. Okay, according to our customs, kitchen utensils belong to the wife. But is it not high time we do away with some of these customs?

The feminist movement in Zimbabwe

Except for a few leaders, this issue has not received the attention it deserves. Why have our female MPs not raised their voice on the manner, Elizabeth Tsvangirai has been treated by the Tsvangirai family? And our male MPs have no excuse either, they represent both sexes in their constituencies.

The side-lining of Thokozani Khupe within the MDCT received far louder cries than this issue. Whilst this issue affects a lot of ordinary women in our society. I know, it is not a question of either or. Both issues are important and both issues, must be confronted. But if we are to grow the feminist movement and the level of consciousness within our people, these are the issues we must take with gusto. They relate to every woman, rich or poor, educated or uneducated, urbanite or villager.

Tsvangirai: an ordinary villager, who did extra-ordinary exploits

During the past few days, I have been boiling with anger over the way Elizabeth Tsvangirai has been treated by the Tsvangirai family. Yes, I have ranted and vented my anger on social media. But, then I thought, maybe it was Morgan Tsvangirai’s way of forcing us to have this difficult discussion about the treatment of widows and widowers. His last political act, a true politician even in death.

Thank you once again ‘Save’, you are a legend and a hero to many. Your legacy shall forever be ingrained in our hearts. An ordinary villager from Humanikwa in Buhera, who did extra ordinary exploits. Fambai zvakanaka ‘Save’ muzorore murugare and rest assured, we will take the struggle forward.