Women in all sectors of our society are faced with strong and opposing forces that deny them opportunities to grow to their full potential. In this article, I take a particular bias towards politics simply because of my own personal interest in politics. However, it is important to note that the challenges faced by women in politics share common roots with the challenges faced by women in other sectors. These opposing forces emanate from patriarchy which is embedded in our culture and value system.

The origins of women’s oppression

That is why, I view patriarchy as an evil that must be fought by all of us. But before we do that, we must have at least a basic understanding of its origins. Most Paleontologists believe that from the Paleolithic age to the Bronze age, men and women had a very positive and complementary relationship.

Through dialectical materialist analysis Mies (1986) attributes the changes to that relationship to the division of labor. She says men became hunters and women became gatherers. Hunting then led men to have expertise in simple weapons of aggression and capture. Men were then able to accumulate wealth by dominating women and capturing tribes they came into contact with. In short, patriarchy came through force and pillage.

Maria’s analysis puts women oppression and slavery in the same epoch. In my view, this implores us to fight patriarchy with same venom and viciousness people fought slavery with. I know, women conditions have improved and the gender inequality gap has shrunk but more still needs to be done. All of us, men and women, we have a role to play in asserting and placing women as equal partners in society.

How have we fared thus far?

Since independence, women have made significant progress, reducing gender inequality in many professions. Unfortunately, politics is not one of them. According to (Mervis Zungura & Eve Z Nyemba, 2013)  women have constituted around 15% to 20% of the total parliamentarians from 1990 to 2008. And due to a temporary measure in 2013 to reserve 60 seats for women, the number doubled from 17% in 2008 to 35%.

So yes, some progress has been made but more still needs to be done. Even with the temporary reservation of 60 seats, women remain highly under-represented. 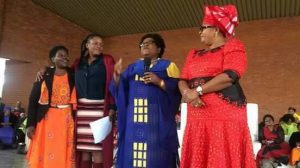 If we are not vigilant, we might lose the few gains we made in 2013. Just a few weeks ago in Bulawayo, women joined hands through a cross-party platform to strategize on women issues and on how to fight Mugabe. Even before the meeting had finished, faceless men started throwing baseless accusations. Accusing Mujuru and Khupe of planning to oust Tsvangirai.

Least, Zanu PF male chauvinists start celebrating, let me remind them, they are not any different. After Mujuru’s expulsion, did we not hear Zanu PF zealots telling us, ‘she is shallow and incapable of running Zimbabwe’? Yet she was the vice president of Zanu PF and the republic for a decade, for crying out loud. If she did not have the capacity, why was she appointed the vice president of the republic in the first place? Is it not the worst form of sexism, for men to manipulate women in their factional fights?

Women can also be their worst enemy at times

Men are the architects of patriarchy but women can be used as its tools too. Remember at Mujuru’s accession, becoming Zanu PF’s second secretary and the country’s vice president, most people thought they were witnessing the dawn of a new era. Young women were buoyed up and young girls inspired by her example.

But all it took to reverse these gains was another woman. Grace Mugabe and her coterie of cheerleaders at the behest of Mugabe went around the country calling for Mujuru’s removal. It would have been understandable had they called for her removal and then asked her replacement to be a woman.

But women cheered and undressed their female leader in support of Mugabe and Mnangagwa. They were not ashamed to change their party constitution that required at least a woman in the presidium. Foolishly, they undid the work of some feminists in Zanu PF and undermined themselves for a few pieces of silver. This is an example of an internalized patriarchal value system that women are not able to do what women can do.

At the women’s cross-party meeting in Bulawayo, participants under the shevote banner demanded 50% representation in the 2018 elections. Indeed a noble idea worth pursuing. Unfortunately slogans alone are incapable of making this noble desire a reality.  According to (Chiroro, 2005), no country in the world has managed to attain at least a 30% of female representation without a quota system. If we are to increase women representation in the legislature, we must demand a quota system that ensures that. Anything else under the current conditions is just but sloganeering.

Thirdly, women must claim a real stake in politics as they are in the majority. I stand to be corrected if I am wrong but I believe women are more active in politics than their male counterparts. Time and time again, I have seen women taking the front role, knocking on doors campaigning. Yet, they canvass support for male politicians. They have the power in their hands to increase the number of women parliamentarians.

I used to view women organs within political parties as a form of discrimination. I could not fathom why women could not operate within the main wing like men. If men really wanted to accommodate women they could have given them quotas in the main wing. To me this was a disguise to give women pseudo recognition and power. But alas, the current ANC women’s league is showing that there is real power in these women organs. Of course they are being supported by very powerful people but they are pushing the ANC and possibly South Africa towards its first female president.

This is a clear testimony that even though patriarchy is still present in our society, we are moving in the right direction. As we continue with our democratic struggle, we must never forget Sankara’s words when he said ‘the revolution and the women’s liberation move together’. It is our collective responsibility as feminists (men and women) to provoke cultural transformation and establish new social relations.

Let it be known, it’s not going to be easy, this task is formidable but I say it’s necessary. Only when women and men become equal partners, can we unleash the full potential of our country.

Yes, it can be done.