Even after purging Mujuru and her colleagues, factionalism remains rife within Zanu PF. Mugabe knows that his leadership can only be secure when there is division and infighting in Zanu PF. In 2013, the Lacoste faction thought the succession debate was a done deal but the master was at work. Doing what he knows best, dividing and conquering. Mugabe through his wife created the new faction nicknamed Generation 40 (G40). Surely, the more the things change in Zanu PF the more they remain the same.

One would have hoped that the emergence of this Generation 40 would bring a breath of fresh air to Zanu PF politics and possibly to the succession debate. It is unfortunate, these supposedly young Zanu PF members (young in Zanu PF terms) are young in name only; their politics is the same tired and old Zanu PF politics. Perhaps because the puppet master is a living ancestor.

Most people agree, succession debate in Zanu PF is inevitable. The law of nature must take its course and cannot be reversed. Mugabe is in his twilight. But Kasukuwere, a member of the Generation 40 had the audacity to label any succession discussion treasonous. With such threats, you would be forgiven to think that people are discussing the succession of a king. But no, people are discussing the succession of a self-serving frail nonagenarian, a corruption kingpin, an incompetent president if I may add.

That said, Kasukuwere’s statement is both welcome and worrying at the same time. Welcome in that it has made it plainly clear that the faction Generation 40 does not subscribe to democratic principles. Freedom of expression is alien to this mafia clique. At least, it has laid its autocratic credentials on the table for all of us to see. However, the statement is worrying in that it shows Zanu PF is incapable of ushering in a new dispensation post Mugabe era. A dispensation where issues and ideas can be openlyy debated without threats of victimisation.

Jonathan Moyo and the bankruptcy of the Generation 40

Jonathan Moyo, another key figure in the faction Generation 40 waded into the succession debate during his Sapes lecture a few weeks ago. Instead of putting his faction’s ideas on the table, he turned the succession debate into a discussion of personalities. Even reducing it further to who joined the liberation struggle the earliest. As if this will help in any way to solve our current challenges.

If this is the best the learned professor can do, then Generation 40 is doomed post Mugabe. It’s supposed to be a faction of the young, a faction of ideas. I am afraid they are proving that Zanu PF is incapable of transformation. Both factions are behaving the same. Post Mugabe era, Zimbabweans expect to see our politics become a contest of ideas. Let this contest of power for the sake of power die with Mugabe and his generation if there is still anyone else left.

We all know Zanu PF is full of sycophants but Kudzanai Chipanga another member of the Generation 40 took bootlicking to another level. Last week, he heaped adulations on Mugabe, even equating him to an angel. If the Mugabes had any shame, they would have been embarrassed by such empty flattery. Even some staunch Zanu PF supporter felt uncomfortable with such idolatry.. 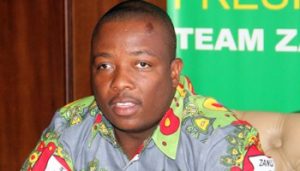 Given the opportunity to address the nation, all Kudzanai could do was sing Mugabe praises. You can only but wonder how such an empty vessel ended up occupying such a position. Surely with leaders like Chipanga how can a new Zimbabwe be born?

But this tom foolery is not unique to Zanu PF alone, it cuts across the political divide. Even though most youth leaders in the opposition movement are university graduates, they have not advanced or articulated any clear policies. As the vanguard of the struggle they have been found wanting. They have absconded their responsibility to shape the national discourse.

Takura Zhangazha has tried without success to initiate a debate, challenging the neoliberal policies being pushed by both the opposition and government. Unfortunately, no one  dared to take him up on the debate. Its as if there is consensus in Zimbabwe over neoliberal policies and he is a madman ranting over nothing.

I presume, this adequately describes the interregnum described by Gramsci when he said the old is dying but the new cannot be born. I posit that the youth will only be able to fulfil their historical mandate as the vanguard of our struggle for a new Zimbabwe when they begin to intellectually interrogate national issues and ideas thus shaping the national discourse.

There is absolutely no excuse for the mediocrity they have thus far displayed. Thomas Sankara, Malcolm X and many others were able to help transform their societies in their thirties. Mandela’s youth league was able to launch Umkhonto we Sizwe by convincing the ANC to change its non-violence policy. Malema’s youth league was able to force the ANC to adopt the economic radical transformation policy.

It is not enough to chant Mugabe must go or to praise him but the youth must begin to paint the picture of a Zimbabwe they want to build. Failure to play this historic and critical role will facilitate their abuse in politics. The youth are too important a resource to be used as foot soldiers in this our struggle.