Good morning Zimbabwe and complements of the new year. It has been a while since we last had a conversation. A lot has transpired during my absence. 2017, could not have ended any better. I cannot fathom anything better than the fall of the incompetent and corrupt Robert Mugabe and his ignoramus wife.

They have eyes, but they do not see

Ancient wisdom must have informed Grace Mugabe that when a drum is playing too loudly, it’s close to tearing apart. But I cannot fault her, even our so called political analysts did not see November coming. They could not even, decipher the decisive import of Vice-President Constantino Chiwenga’s press statement. But my greatest disappointment came when they failed to understand the meaning of tanks in the streets of Harare. There and then, I perfectly understood what Jesus meant when he said they have eyes, but they do not see. 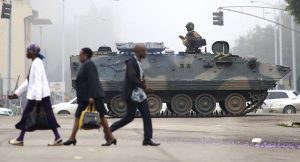 A military tank in the heart of Harare Nov 2017

Like doubting Thomas, they had to see the now Foreign Affairs and International Trade minister, Retired Lieutenant General Sibusiso Moyo on the television, clad in his military gear to understand what was happening. Quite frankly, if I was the opposition, I would not be comfortable taking political advice from such people.

As if their failings were not enough, they tell us now that the opposition is going to be walloped in the coming elections. Speaking with so much authority as if they have crystal balls to see into the future.

Before Mugabe’s downfall, they constantly told us that Zanu PF under Mnangagwa would be weaker. Now they are singing a different hymn. What is it ma comrades, has Zanu PF become stronger?

In order to prepare adequately for the forth coming elections, the opposition must study this issue seriously. I personally posit that, Zanu PF has become stronger under Mnangagwa and here is why.

Since the early 90’s, our economy has been struggling. Some have often cited the Economic Structural Adjustment Programme (ESAP) as the progenitor cause. However, I sincerely disagree. The genesis of our economic problems was laid in our economic policies in the 80’s. Thus, we have never been financially prudent as a nation. We relied too heavily on aid to finance recurrent expenditure and to fund development. Anyone with a bit of sense, would have known back then that it is an unsustainable way of funding growth. What ESAP tried to do and dismally failed was to address those structural challenges. In the late 90’s, relations with the international community strained, donor aid dried and the balance of payments support was frozen and the rest is history.

Mnangagwa unlike his predecessor, understands that investment and not empty platitudes is key to solving our economic challenges. However, there are two caveats, to this point.  Firstly, it is one thing to know what needs to be done and another to doing it. In as much as many Zimbabweans, welcome the changes in the government ‘s tone on the economy, they remain sceptical on its ability to implement its plans. Secondly, investment is a long-term game, unfortunately our people want short term improvements in their lives. In short, Mnangagwa will not be able to appease many of the urbanites. And therein lies the opportunity for the opposition to take advantage of. But, in order to do so, the opposition must change its language and start speaking Economy.

I have noticed a very worrying development in the pro-opposition camp. Instead of talking about, unemployment, healthcare, corruption, investment, good governance, devolution etc, the opposition is focusing rather on petty issues. One day its about the number of Mnangagwa’s bodyguards. Another day, they are questioning, why the First Lady Auxilia Mnangagwa did not do hospital visits before becoming the first lady. These are petty bourgeoisie discussions. They do not answer the everyday, bread and butter issues affecting the common man/woman in the streets. Each day, with such discussions, we lose the moral high ground on the economy. Have we forgotten that the economy is our forte?

I am sure there is little disagreement on this issue. Our challenge is to now put our house in order. If we are not careful, we will be sitting on the opposition benches once again, come elections.

3. The consolidation of Zanu PF’s pillars of support

The frail, power hungry Mugabe together with his erratic, infantile and divisive wife had estranged Zanu PF’s key pillars of support. The war veterans and the security sector were the Mugabes’ prime targets, even though they had been key to Zanu PF’s survival post 2000.

Now, after successfully disposing Mugabe they are bubbling with energy and oozing confidence. They are going to be the key actors in Zanu PF’s election strategy. Of course, chiefs are another key component to that election strategy but they are malleable. They have neither conviction nor backbone, they follow wherever the wind blows.

That said, Mugabe and the G40 faction still have supporters within Zanu PF, their numbers are unknown and unverifiable. On top of that, we must bear in mind that this is the first election after Mujuru left Zanu PF. Hence, if the opposition is cunning enough, it can manipulate and facilitate ‘Bhora Musango’ 2.0.

In a nutshell, Zanu PF has become stronger, but I do not believe that the 2018 elections are a lost cause.

Did the fall of Mugabe signal a new era?

In concluding, let us re-visit the original question; has the fall of Mugabe signalled a new era in Zimbabwe? Regardless of what Jonathan Moyo and his G40 cohorts say, Zimbabwe has entered a new era. The challenge for us, is to decipher what kind of new era, it is.

We do not have to dig too deep to find the answers. Mnangagwa’s interview with CCTV Talk Africa programme sometime in 2015, gave us an insight into his ambitions and his vision for Zimbabwe. He modelled answers along how Deng Xiaoping transformed China. Thus, studying Deng Xiaoping and the transformation of China we can learn at least two lessons. Lessons, I think are going to be key in this our new era.

Mnangagwa sees himself as the replica to China’s Deng Xiaoping.

In that interview Mnangagwa saw himself as a replica of Deng Xiaoping, with a mandate to modernise Zimbabwe. With just over a month in charge, he has shown an unbridled focus on the economy. His re-engagement efforts, the national budget and his State of the Nation Address pontificate to this. 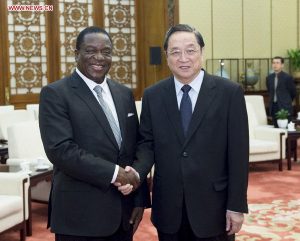 Here is the flip-side to Deng Xiaoping’s transformation of China. When Deng Xiaoping took the reins of power, many anticipated, he would democratise China. However, in 1989 he dispelled that notion, when he ruthlessly thwarted the Tiananmen Square protests. Armed with live ammunition and tanks, the army massacred hundreds among hundreds of thousands of demonstrators, who had been calling for democracy, greater accountability and freedom of the press.

This makes me believe that Mnangagwa like Deng, will vigorously attempt to address our economic challenges but will not extend such vigour and effort in levelling the electoral playing field. Even if he personally wanted to, the army will not accept such shenanigans. They invested a lot, when they disposed Mugabe, now it’s their time to enjoy the fruits of their labour. 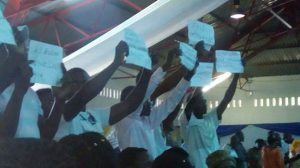 To get a glimpse of what this new era is not about, let us re-visit the story about the 8 Mthwakazi Republic activists, who were arrested two weeks ago. They were tortured and detained for demanding truth and justice for Gukurahundi. So, yes, we might have moved away from Mugabe’s empty and meaningless platitudes on the economy but it is not yet uhuru. As we prepare for the forthcoming elections, we must know that Mnangagwa will keep one eye on the economy and the other on power retention.

Our struggle for democracy continues unabated, hopefully in this new era, on full stomachs.