Skip to content
I am a fan of Black American history. As such I have read a bit on Fredrick Douglas, Harriet Turban, Booker T Washington, Marcus Garvey, Martin Luther King junior, Malcolm X among many others. But Marcus Garvey’ solid Pan-African philosophy touches my heart the most. More so because I identify with this philosophy. Africa and the African diaspora we are one, including you too, our brothers and sisters in America.
Which is why I was shocked flipping through the news channels on Wednesday the 21st of September. African Americans demonstrating in support of Mugabe at the UN headquarters in New York. Effectively countering the Zimbabwean demonstration, against Robert Mugabe’s rule. I was angry with all African Americans at first but then I figured it would be too harsh to do so. How could I paint all African Americans with the same brush. Most of you do not even know about this demonstration let alone the organisers. As a result, I bear no grudge with all of you.
I will not cast aspersions on all of you, but I will take my issue with the December 12 movement which organised the demonstration in support of Mugabe. A tyrant who has run down his country into a basket case. Reducing his once admired fellow citizens into paupers, all in the name of fighting imperialism.
Now December 12 movement, I am not challenging your right to demonstrate. I accept that right totally. But I found it most interesting that most of your members participating in that demonstration could not point Zimbabwe on the world map. They did not even know basic facts about Zimbabwe; like the year we got our independence or that we do not have oil. Maybe next time, educate your members when you engage in issues that do not concern you.
It is typical American behaviour of you to meddle in our internal affairs. Zimbabweans simply wanted to tell their President that he has over stayed his welcome but for some weird reason you chose to join in the discussion. We know your imperialist nation meddles in domestic issues of other smaller nations. We somehow thought since you are family, you will respect our sovereignty to hold this internal conversation without outside meddling.

Since you have chosen to meddle in our affairs, come let us dialogue. Converse and find each other. Believe you me, there are so many issues that we can agree on. You might not know this because we have not been as loud or equivocal as Mugabe in the past. Rest assured we agree on many issues. I am however willing to find out areas where we do not agree.

When Mugabe talks about taking back our natural resources the whole country is in agreement. He stands out to the outside world as the true champion of his people. But we who know him disapprove his abuse of this noble idea. Instead he using it to build patronage. Rewarding his cronies at the greater majority’s expense. Zimbabweans are wallowing in poverty. For rhetoric cannot feed their empty stomachs. Our demonstration in New York, was a cry for a Zimbabwe that works for everyone. Your banners said he was right. Is it because you support a Zimbabwe that works for Mugabe’s cronies only? Do our sorry African lives not matter to you? If not then what kind of Pan Africanism is that?

When Mugabe says the United Nations needs to be reformed and democratised, of course he is right.  We are in agreement with that view too. But do not expect Zimbabweans to shower hypocrisy with praises. Charity must always begin at home. You cannot be a democrat at the UN and an autocrat at home. In Zimbabwe he arrests, detains and tortures opposition activists. At times abducting and or even murdering opposition activist. Now can you understand why we are not enthused by Mugabe talking about democratising the UN. If he believes in democracy, why does he not exercise it, in his own country? Yet you say Mugabe is right, do our African lives not matter? 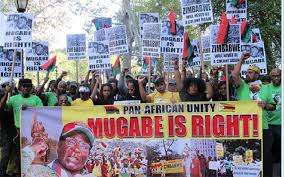 When Mugabe talks about ending the Palestinian occupation and the Two State solution, of course he is absolutely right and we are in total agreement. Zimbabwe’s stance is unequivocal, Palestinian occupation must end without fail. Mugabe may have wider exposure and international platforms to air his views whilst we have none but our views on this issue are the same.
When Mugabe talks about the International Criminal Court’s (ICC) double standards he is right and we are in agreement. But we also know that the court has not convicted innocent Africans. Should the African lives that are lost at the hands of these monsters count for nothing? Is their African blood that worthless?
When he talks about sovereignty and the ills of imperialism of course he is right and we are in agreement. But sovereignty is not shoving the leader’s will down the people’s throats. We have a right to tell our leaders to go when we no longer want them. We have a right to demand accountability from our leaders who behave more like emperors and kings.
Mugabe is a great orator and a man of high intelligence. His rhetorical exploits are matched by a few. But that cannot make us forget his corrupt leadership. The country lost more than US$15 billion worth of diamond revenue through corruption. If it were the only scandal to grapple our country it would be better but time and again Mugabe has turned a blind eye on corruption. At times even rewarding the culprits. He talks right but talk is cheap. What happened to one man one farm? Together with his wife they have more than thirteen farms. What then are you exactly saying when  you say Mugabe is right?  Don’t our sorry African lives not deserve better?
We are not in agreement with his mala-administration, as we speak hospitals do not have basic medicines including pain killers. Whilst he has been at the country’s helm, the past 36 years, he cannot even trust the healthcare systems he administers. Together with his family they receive treatment in Singapore. Is not what is good for the goose also good for the gander? We demand and deserve better our African lives matter too.
University education is now a preserve of the rich and the middle income. Poor people can no longer afford to send their kids to University. Government support has been withdrawn due to lack of funding. Whilst most ministries with a direct bearing on social services are cutting back on their spending, Mugabe’s travel budget continues to balloon every year. Currently it is bigger than the ministry of Industry and Trade and other important ministries. With such clear lack of vision, how can we expect him to take the country out of this current mess he created in the beginning. I hope you can forgive me, when I do not understand what you mean when you say, Mugabe is right. Are we Zimbabweans then expected to smile at our president and pretend that our country is heading in the right direction? Just in case you did not know we value our African lives to just let things continue as they are.
Even though the movement Black Lives Matter started in the US it is now bigger than just African American lives. Black Lives Matter must be more than just a slogan or a preserve of African Americans being shot by the American police force. It must be all encompassing for black people everywhere across the globe.
Mugabe must go because  Black Lives in Zimbabwe matter too.
Best Regards